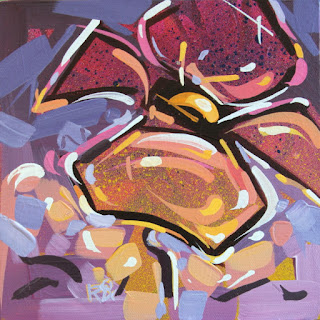 I did a lot of 6" x 6" single flower compositions, playing around, experimenting with textures, colors and shapes. Going up one size (8" x 8") made it possible to push things further. I had a lot of fun, (still do).
Posted by Roger Åkesson at 15:10 1 kommentar: 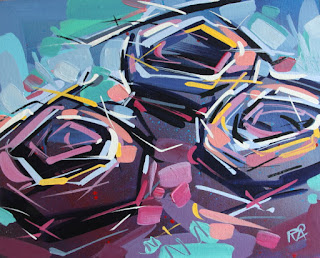 
This is a medium sized bird's abstraction I did recently. After the initial start I decided to use a limited color palette on this one. I tried to keep it rough, but clean, and I think I succeeded with that.
Haven't painted lately, been busy with our garden, pulling down our hedge on one side and planning how the garden will progress, new fence, buying a greenhouse etc.
My 4 weeks vacation starts tomorrow and I will use it mostly for painting and gardening, but with some relaxing and small drives to friends and family.
Posted by Roger Åkesson at 13:27 Inga kommentarer: 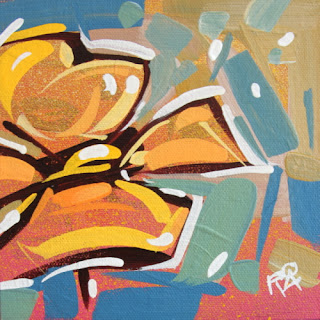 This is one of the small abstractions I had fun with, experimenting with form and colors. The painting is a mixed media painting.
Posted by Roger Åkesson at 11:36 1 kommentar: 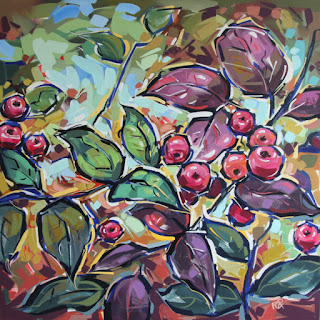 1,050 $ (Shipping and handling included in the price) Click here to purchase


We didn't plan to do some work done with our garden right now, but we are. We have pulled up a high hedge with European Beech and replacing it with a fence. That hedge took a lot of space from our garden, and stealing a lot of light. Pulling up those trees and roots is hard work. The hedge consisted of 74 plants.

This is not a season painting, but a favorite subject of mine. Rowan berries, a kind of autumn berries.
Posted by Roger Åkesson at 13:05 3 kommentarer: 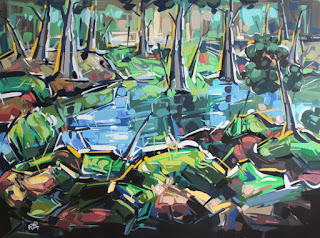 This painting was a few minutes from being scrapped and re-used for a new painting. I started painting it around 6 months ago, and had a rough time, one minute I loved where it was going, hating it 5 minutes later. I had no idea where I was going. It was not realism ( like I would ever), but it wasn't abstract either.
I just put it aside and thought it would be one of those that wouldn't get finished. It had potential, but it also had it's problems, but I had no vision.
I told my biggest fan and critic what he thought, and he said that he loved it and forbid me to reject it. I took his advice and decided to give it a go, to solve the things I didn't like.
Am not objective right now, but I solved it, and I am pleased with the end result.


I had no idea what picture I had used as reference and had to just to make it work.
Posted by Roger Åkesson at 14:45 3 kommentarer: 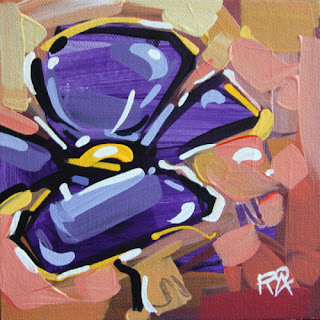 I have played around with some different subjects lately and will post them soon. I also got some more flower paintings that I haven't posted yet. I know that I will do some large landscape paintings, but I also got the idea to do some faces, to explore and find new ways to do it. I just have to get through the initial hesitation and insecurity.  Sometimes I am my own worst enemy and over thinking things.
Posted by Roger Åkesson at 15:13 2 kommentarer: 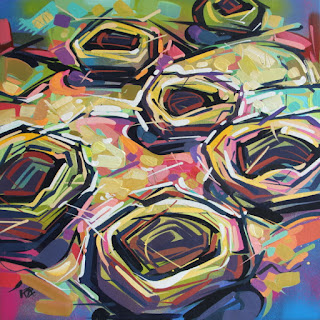 
This is a colorful bird's nest painting in my 3rd largest format. It was also the first one that I used mixed acrylic media on. It took a while to get things sorted out, but it was worth it.
Posted by Roger Åkesson at 13:16 2 kommentarer: 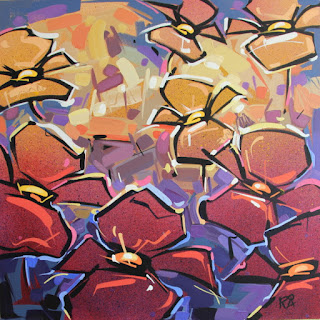 
This a medium sized painting in my mixed media flower exploration. I went with a limited color palette and had fun with it. 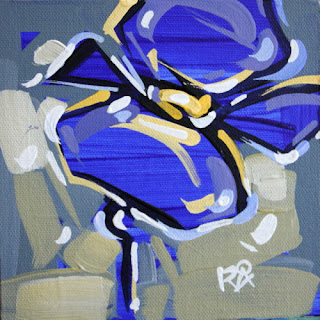 I must confess that I love this one. The simplicity of the flower and the way it is pulled out from the background with some simple rough brush strokes. I like the simplicity in a painting, the graphic and design element of it, but I also like complex color settings and compositions. I don't like the times when I get to the point where I am between. Have I gone too far or haven't gone far enough?
Posted by Roger Åkesson at 13:23 2 kommentarer: 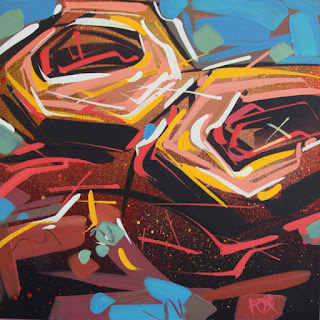 SOLD
I am very satisfied with this one. It showed me that mixing soft and hard can work with bird's nest too. Have to find the balance in the soft part, can help or be a burden, all depend what you want from it.
Posted by Roger Åkesson at 13:08 1 kommentar: 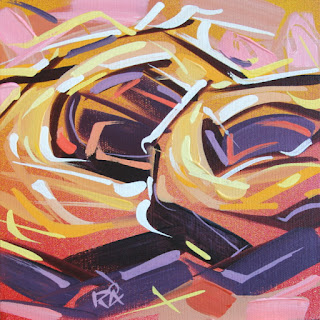 
Have been playing around with bird's nest lately in the same way as I did with the flowers, using normal acrylic paint and acrylic spray paint. This is one of my smallest ones I have done and was one of the initial tests I made. What I like about this approach is the play between the soft and the hard.
Posted by Roger Åkesson at 12:41 1 kommentar: 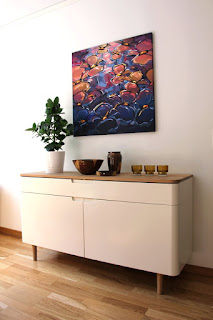 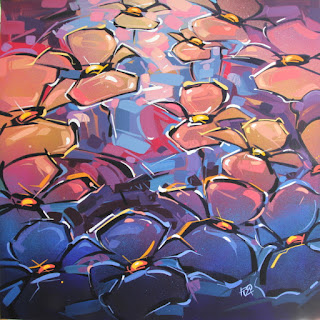 
This is one of my large flower abstractions. Can go up one size, perhaps I will do that some day. I kept to a limited color palette and worked more with the feeling and atmosphere. I haven't used any reference photo for a while and it is a blessing and a curse. I can experiment this way, but I also don't know what the painting will look like, what direction it is going to take. I go on instinct  and experience.
Posted by Roger Åkesson at 13:07 1 kommentar: 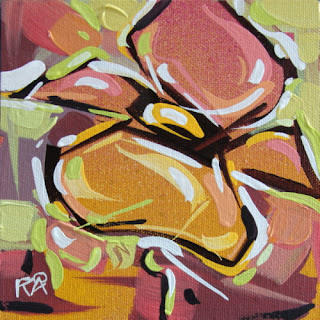 SOLD
I have been playing around / experimenting with new mediums lately and I am having a lot of fun doing it. The way I am working is also having impact on my color choices, something I think shows in this painting.
Posted by Roger Åkesson at 14:03 1 kommentar: 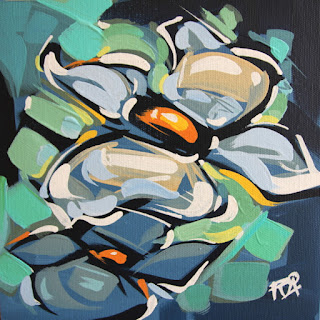 
I did this small duo flower abstraction a while back. Painting light objects isn't easy when you work with lines. It is so easy that the lines get too much attention and that the colors get pastel like and boring. I think this one turned out great. I have to remind myself that I need to be bold, but at the same time not rush things, keep it clean and graphic.
Posted by Roger Åkesson at 14:10 1 kommentar: 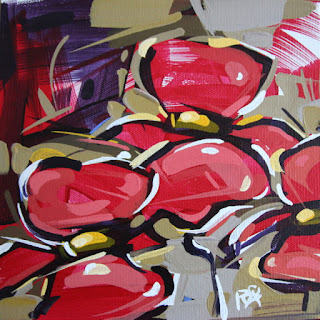 
Forgot to post this one. One of the first paintings that I did in this series of flower abstractions that I have been doing lately. I kept the flowers simple and with a limited color palette, but pushed the contrast a little. Pushing oneself outside the comfort zone is always a learning experience.
Posted by Roger Åkesson at 14:48 Inga kommentarer: 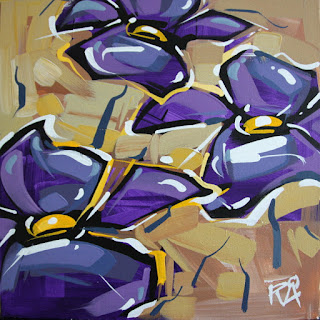 
I did this one a while back as a contrast to a rough painting with a lot of details. I wanted to go simple, clean and graphic.
Posted by Roger Åkesson at 12:34 1 kommentar:

Visa hela min profil
All images are copyrighted by Roger Åkesson. The use of any image from this site is prohibited unless prior written permission from the artist is obtained.